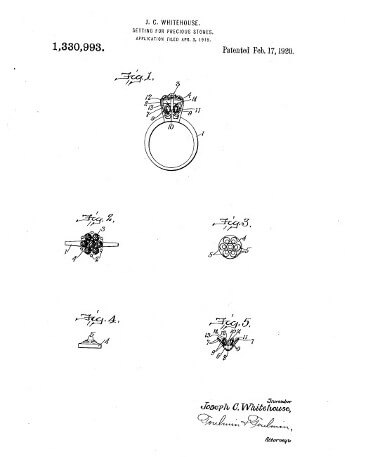 Handcrafting Fine Filigree for over 120 years

In the late 19th century, Cincinnati was a bustling industrial landscape strategically located on the Ohio River, the gateway to the South and West.

From this time period grew a jewelry manufacturing renaissance, fueled by classically trained German jewelry artisans who came to Cincinnati with the promise of employment at the finest manufacturers in America. Cincinnati became known as “The Jewelry City.”

Whitehouse Brothers was founded in 1898 by Joseph C. and William H. Whitehouse. The brothers quickly developed a reputation for manufacturing finely designed and handcrafted Platinum jewelry.

By the early 1920s, Whitehouse Brothers had grown to become the largest jewelry manufacturer in America, employing more than 100 craftsmen. Among those employed were designers of precious metal jewelry, as well as classically trained sculpters and painters.

After World War I, Whitehouse Brothers offered to undertake the training of wounded soldiers returning from combat. The veterans were trained in the manufacturing of jewelry for six months so they could find new work in the industrial world.  Many of the trained veterans became employees of Whitehouse Brothers for years to come.  Being a seated profession, becoming a jeweler was a perfect fit for wounded soldiers looking for steady well paying work.

As has always been the tradition, everything at Whitehouse Brothers is manufactured by our workers in the United States -- nothing is ever outsourced. We use 100% recycled metal and responsibly sourced diamonds as a staple of our manufacturing 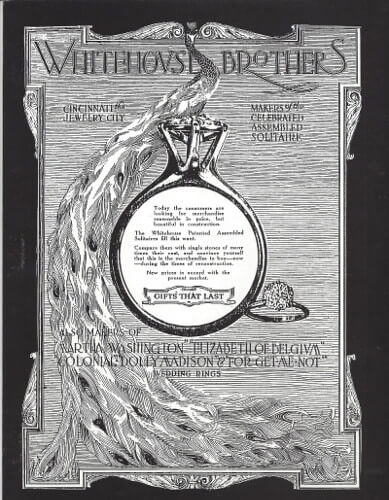 Whitehouse Brothers’ most well-known craftsman was Frederick William Kolde, born in 1870.  He began his career in Breslau, Germany and moved to Cincinnati shortly after.  He remained employed at Whitehouse Brothers as a designer and jeweler for nearly 50 years, until retiring at the age of 80.

Frederick designed many of the filigree mountings that are still available in the Whitehouse Brothers catalog today. The timeless styles are sculptures reflecting Frederick’s years of drawing, painting, metal working and his perception of the world.

One example of his work, style #8135, was designed to imitate the lush gardens of local Cincinnati park districts. Other styles created by Frederick include Victorian, Floral, and Naturalistic motifs; a signature of his work.

Frederick also created ecclesiastic metal works for many churches in the Cincinnati area and is known in the art world as a landscape painter. His paintings also featured floral and naturalistic subjects as in his jewelry and sculpture work.

In the early 20th century, Platinum was an unpopular choice for many jewelry manufacturers because of its complicated workability. Whitehouse Brothers’ master Platinum craftsmen had developed processes for manufacturing Platinum, achieving a superior product compared to Gold.

To promote the use of Platinum, Whitehouse Brothers developed a five part series to be printed in the Jeweler’s Circular-Keystone (JCK). In 1919, Whitehouse Brothers released a series of ads known as “The Romance of Platinum.” The ads referenced Don Antonio de Ulloa, who in 1335 gave Europe its first knowledge of Platinum. Ulloa was shown in the ads explaining Platinum to a group of royals. The ads were praised for using the history of the basic material to interest customers.

Throughout it's history, Whitehouse Brothers has focused on building quality jewelry based on fine designs. Platinum has allowed not only the craft of fine detail but of lasting perfection. Platinum is the king among metals, allowing the craftsman’s hands to raise it to the plane of the jewel itself. It becomes more than a mere setting, it is an essential part of a real masterwork of artisanship.

Many Whitehouse Brothers designs crafted in the early 20th century are still available today, including the Colonial Wedding band, Heart of the Vineyard and The Whitehouse.

Our goal at Whitehouse Brothers is to create future family heirlooms to be passed down from generation to generation.